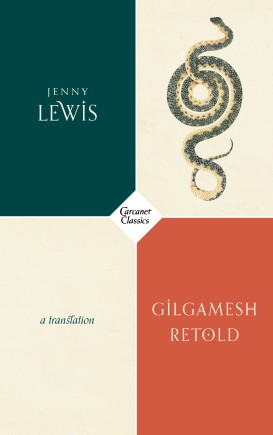 Jenny Lewis relocates Gilgamesh to its earlier, oral roots in a Sumerian society where men and women were more equal, the reigning deity of Gilgamesh’s city, Uruk, was female (Inanna), only women were allowed to brew beer and keep taverns and women had their own language – emesal. With this shift of emphasis, Lewis captures the powerful allure of the world’s oldest poem and gives it a fresh, more human dynamic.

Gilgamesh Retold (Carcanet Classics, 2018), also available as an e-book (Kindle) and an Audiobook.

‘Our Book of the Week is Jenny Lewis’s marvellous new version of Gilgamesh, just out from Carcanet.’ London Review of Books (Book of the Week, October 2018)

‘My own recommendation would be…Gilgamesh Retold (2018), by the Anglo-Welsh poet Jenny Lewis, who teaches poetry at Oxford University. Lewis’s version is very musical, with rhymes and chimes and shifting meters. It can be blunt. Its account of the murder of Humbaba is the nastiest I know. Yet her translation is also the most tender, the most tragic—the one, I think, that might be recommended by feminist scholars. Joan Acocella, The New Yorker

‘I discovered this book by chance and bought it more or less on a whim, and wow! What a find…a rich tapestry of wonder and excitement…her description of the Sky Bull, for instance, which is sent by the goddess Inanna to destroy Gilgamesh for rejecting her advances is absolutely something to marvel at…exceptionally beautiful poetry [that] makes these ancient worlds a little more accessible for a modern reader.’ Canonball Read Review No.35

‘A vivid, even cinematic translation… Lewis’s approach to her translation – an intuitive interpretation – gives her license to make room for the feminine… Lewis recalls those matriarchal goddesses of early religions who are now so frequently forgotten – or redacted. Gilgamesh Retold recognises the power of stories…to save, as well as destroy lives.’ Hetta Howes, TLS

‘… a daring and deliberate approach to formal experimentation…Through the innovations described above, Lewis seems to claim the epic for our shared cultural consciousness, locating it in a fresh imaginative space between what we know today as separate mythic traditions.’ Theophilus Kwek, The North

‘An impressionistic soundscape for various voices, it is analogous, perhaps, to some of the passages in Logue’s adaptations of Homer, but has an affinity also with the magic forests of medieval romance and the encounters with ogres which so frequently take place there. By any standard, Jenny Lewis’s Gilgamesh Retold is essential reading, not only for her magisterial synthesis of ancient myth, but for her impressive variety of metrical forms which in itself mirrors the evolution of literary traditions from the Dark Ages to the post-modern.’ David Cooke, London Grip

‘The first ever translation of the Epic of Gilgamesh by a practicing female poet. Jenny Lewis is also the first translator to deploy a variety of forms, using metre, rhyme and free verse as well as experimental forms to bring the poem alive. Sanmin Literary Review

‘[Gilgamesh Retold is] flowing, lucid and involving…a journey to the deep past. ’ Stride Magazine

‘Gilgamesh Retold is terrific – and very beautiful. It is the fullest version I have ever read, and the richest. It has the immediacy of dream. I’ve never felt from other versions just how precious the life is which Gilgamesh longs to keep.‘ Alison Brackenbury

‘Jenny Lewis’s Gilgamesh Retold is not simply a retelling of the ancient epic; it is the spirited ‘response’ of a contemporary poet to the original legend. Using a variety of lively metrical forms and expanding the material where appropriate – notably regarding the goddess Inanna – Gilgamesh Retold is a vivacious reanimation of a timeless narrative for today’s readers.’ Theodore Ziolkowski, author of Gilgamesh Among Us: Modern Encounters with the Ancient Epic

‘Gilgamesh Retold by Jenny Lewis rings with the strength of the original texts and sings with its own poetic originality.’ Fran Hazelton, author of Stories from Ancient Iraq (2010) and Three Kings of Warka, Myths from Mesopotamia (2012)

‘While bringing back to life Gilgamesh and the immense cultural heritage of Mesopotamia-Iraq, Jenny Lewis also proves to us that poetry is, as it always has been, the best way to rekindle the past while capturing the essence of the times we live in.’ Adnan al-Sayegh

Read Jenny’s blog for Carcanet about recording the audiobook
https://carcanetblog.blogspot.com/2019/06/jenny-lewis-recording-gilgamesh.htm