I was delighted with this beautiful recording by Iraqi poet, Adnan al Sayegh, of my poem Mother, from the sensitive translation into Arabic by Marga Burgui-Artajo.

Childbirth was like being excavated:
my belly rose on whalebone wings,
pain soared about me like a bloodied angel:

then you were born

I saw you with my own eyes
I held you day and night:
you lay in my arms, a glowing pupa.

At Kut-al-Amara you were back-lit,
the moon pointed you out against the ridge –
when Turkish gunners stopped your spade

Mother was first published in The Oxonian Review; it will be included in Taking Mesopotamia, my new collection, forthcoming in early 2014 from Oxford Poets/ Carcanet. 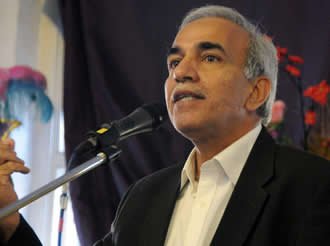 Adnan al-Sayegh (born 1955 in Al-Kufa, Iraq), “is one of the most original voices from the generation of Iraqi poets known as the Eighties Movement. His poetry, crafted with elegance, and sharp as an arrowhead, carries an intense passion for freedom love and beauty. Adnan uses his words as a weapon to denounce the devastation of war and the horrors of dictatorship.”

In 1993 his uncompromising criticism of oppression and injustice led to his exile in Jordan and the Lebanon. After being sentenced to death in Iraq in 1996, because of the publication of Uruk’s Anthem, a long poem in which he gives voice to the profound despair of the Iraqi experience, he took refuge in Sweden. Since 2004 he has lived in London.