Below is a wonderful account of the 31st October Halloween reading by fellow Carcanet poet, Alison Brackenbury, using my own photos. You can also read it on the Carcanet blog by clicking the link below.

I have been haunted all year by readings. Skies, my new Carcanet collection, is due out in 2016.  So my own skies already glimmer with reading dates for London jazz events, Northern universities, and poetry cafés on the windy South Coast.

But I am deeply grateful for these ghosts from the future. First, I am very thankful to have invitations, in a poetry world crammed with talented poets and performers. Secondly, I am very lucky to be able to accept them. I have now retired from an industrial job where the demands of Rolls Royce subcontractors meant I had to turn down invitations from the Troubadour for two decades!

I sometimes reflect that, when I began publishing poetry in the 1980s, readings were an optional extra. Philip Larkin, for example, did very few (due, I think, to an early stammer?) But I still bought Larkin’s books, from well-stocked bookshops. Now most of those bookshops are gone. I know some readers of poetry never glance at reviews, but buy all their books at readings.

I do worry that poets with demanding jobs may be unable to reach such readers. But I share the current enthusiasm for live performance (especially open mics). Shamed by the excellence of younger performers, I now often perform poems from memory. So I have poems haunting me, at breakfast or at bus stops.

The poet Jenny Lewis, with her long background in song, has a deep understanding of performance. So I was very honoured to be invited by Jenny to join a Hallowe’en poetry reading, featuring Mimi Khalvati, Claire Crowther and Lee Jing-Jing, at the excellent Albion Beatnik bookshop in Walton Street, Oxford.

The bookshop, as Jenny had promised, was awash with bats and cobwebs. The pumpkins’ jagged mouths glowed. The audience sat quietly in the shadows. Each reader sharply illuminated their own poems. I already knew and admired the fastidious music of Mimi Khalvati’s lines. But, in her Hallowe’en reading, I was also struck by their earthiness: raw references to weather, to moles and bonemeal.

I associate Claire Crowther’s poems with enigmatic menace: the ‘unfenced cliff’. But by the Albion Beatnik’s cliffs of books, I caught, newly, her mention of dust and devils, her loving elegies, and the glowing ghost of Marie Curie.

Lee Jing-Jing read from her first, newly published, collection of poems, And Other Rivers. This included an account of an attempted exorcism of epilepsy: ‘come back home, come back’. Its characters ‘began to invade’ their writer’s dreams. As Jing read of the ‘hiss of gravity against my wings’, a black paper pumpkin fluttered free from the ceiling, then plummeted to the floor. 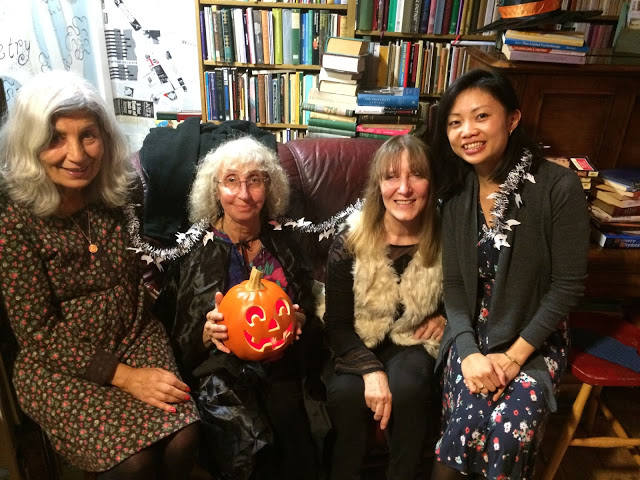 With a wary eye on dangling bats, I read my own selection, while draped with two metres of what a leading supermarket described as ‘Terrifying Tinsel’. Its tiny white ghosts cannot be blamed for the horrified gaze with which I turn to all cameras. But the ghosts and I greatly enjoyed all the contributions to the evening’s open mic: poems of wild boar, opulent moons and imagined, thoughtful dialogues between the living and the dead.

Memories of readings can blow away in time’s wind. So I am delighted that there will be a souvenir of this occasion: a pamphlet with one poem, from each of the poets, loosely linked to Hallowe’en, What did the three Carcanet poets linked to this event provide? 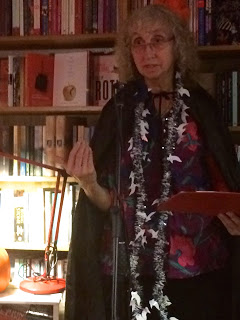 The voice of an irate vegetable grumbles through Jenny Lewis’ poem. If you have secretly felt that all those glowing orange globes are baring their teeth in a less than friendly manner, you will be delighted by Jenny’s ‘disgruntled pumpkin’. It hates children. It loathes elves. It is not too keen on candles, either. You may look at the pumpkin pyramids in supermarkets with a more cautious eye.  Pumpkins may have their own views on their destiny:

Really, my dream was to go in a pie, a great big one.
One of those you see in cookery books on the Halloween page.

My own poem is a breathless view of an animal which I know many people loathe and fear. It is an exorcism, rather than a haunting, which tries to catch the exhilaration of meeting this strange beast:

but bats are speed. A bat has leant
on windless air, flicked body clean,
before eye slows all it has seen […]

Mimi Khalvati’s exquisite contribution sees an ordinary street, transformed by the alchemy of imagination. In her tribute to Klimt, from her latest Carcanet collection, The Weather Wheel, ‘double yellow lines meander in gold metallic ink’. The ‘night fox’ has ‘gold-dust in his fleece’. Into this suddenly magical street comes Hallowe’en: ‘Werewolves, gorgons, are sauntering out of their lairs, trick or treaters’…

Talking pumpkins. Unstoppable bats. A golden fox in a town street. Like Hallowe’en, but with deeper tricks, poetry has many ways to haunt the mind.

On the Occasion of his 150th Anniversary
Let’s fling down a cloak of gold leaf on wove paper,
let’s do the pavement like Klimt.  Like his father

before him, Ernst Klimt the Elder, gold engraver,
and his brother who took up engraving later –

whose deaths in one year were the fount of his vision –
let’s do acacia in a shower of coins, engrave each face

with The Kiss.  For semen is flowing like golden rain,
double yellow lines meander in gold metallic ink

and the streetlamps are on – O spark of the Gods! –
it’s snowing gold flake, sweeping mosaics along the curb,

spandrels of gold between car wheels. Werewolves,
gorgons, are sauntering out of their lairs, trick or treaters

with quince-red cheeks and my beautiful girl in a tent
of yellow roses twines her corn snake round her wrist.

As a night fox trots through a gold-barred gate, trapping
gold-dust in his fleece –  quick, hammer him into the frieze. 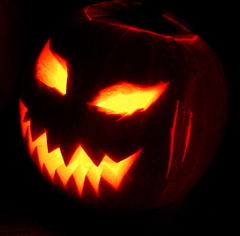 So
So in my dream the birds were bats.
There is that chill which shocks the spine
as daylight thickens, as the line
which flashes over lane or street
is not a bird, which drops to eat
on tables at your garden’s end,
which may have names, familiar, friend.
It is a bat, with needled teeth,
which lets the last blue tilt beneath
at dizzy speed, not needing light
as badger, hedgehog tunnel night
without their eyes, see sound, hear scents,
but bats are speed. A bat has leant
on windless air, flicked body clean,
before eye slows all it has seen,
poised in the gap from warmth to words.
But when I woke, the bats were birds.

It’s No Good Feeling Sorry for Yourself
(or The Disgruntled Pumpkin)
I don’t like elves, horrible little creatures, bad as children.
Children never know when to stop, that’s their problem.
Problem is I was too small for Sainsburies, so I ended up here.
Here I am, so I’d better make the best of it, it’s not so bad really.
Really, my dream was to go into in a pie, a great big one.
One of those you see in cookery books on the Halloween page.
Page down on your screen and you’ll find lots of recipes.
Recipes for Vampire Punch, Bat Biscuits that sort of thing.
Thing is, I don’t actually know what I’m supposed to be.
Be alright, I expect, except it’s not nice having a candle inside you.
You don’t like to say anything, but honestly, you feel a right twit.
‘Twit twoo’, OK, very funny, yes, I know you’re pretending to be an owl.
‘Owl’ isn’t the word, I feel like ‘owling, honestly, bloody goblins.
Goblins get my goat, they really do. And witches. And spiders. And elves.
Elves, I don’t like ‘em.  Horrible little creatures, bad as children… 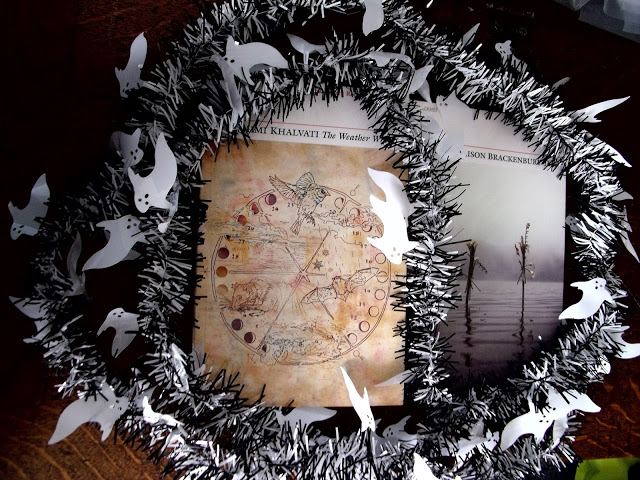